The sixth edition of the Crom Ride 2022 is here We explain everything!

On July 2nd the sixth edition of the Crom Ride, the motorcycle route that takes us from the Costa Brava to the Pyrenees, was held.

The Crom Ride has experienced a complete success of participation with more than 650 registered riders in its sixth edition.
With a careful selection of the most motorbike roads of Girona, from the Costa Brava to the Pyrenees, the route came close to touching the province of Lleida through a checkpoint in the beautiful town of Gósol at the foot of Pedraforca.
Conceived as a motorcycle touring event where twisty roads and breathtaking scenery prevail, the more than 500 km of sections that interspersed twisty courses with other more relaxed ones, were covered without problems with arrivals from mid-afternoon onwards. The participants could already enjoy the Friday before the day of departure of a more complete and crowded Village, based again in the Sports Pavilion of Fontajau, which had an exhibition of brands, accessories, technical assistance … and a good bar service that filled the high temperatures of early July.
The Servei Català de Trànsit, in collaboration with Anesdor, gave its monitored Formació 3.0 courses on safety and driving. The exhibition paddock was attended by Honda Blanmoto, Guzzi and Aprilia Tecnimoto, Macbor/Bordoy, Triumph Girona, Benelli, Royal Enfield, Fantic – Suzuki Importcross, KTM – Kawasaki Basolí, CF-Brixton-SWM-Zontes-Voge Girona Motor Shop, VectorNote, Shad – Galfer / Olympia, Atlantis Moto, Ducati Motounivers Girona, Clice.

The tires were changed by Metzeler, the condition of the brakes could be checked thanks to Galfer, etc … and even equip the bike with a complete set of Shad bags and panniers.

As every year, the different stages were coordinated with the “Patronat de Turisme de Costa Brava i Pirineus de Girona” to obtain singularly beautiful scenic locations. After starting the route early on Saturday morning, the participants headed towards the Empordà through the well-known Santa Pellaia section. After the first control in the ruins of Empúries, which allowed a refreshment thanks to Vilajuïga, a very characteristic water for its “gas points”. The second milestone was, already in the Pre-Pyrenees, at the foot of the impressive basaltic cliff of Castellfollit de la Roca, seen from Montagut, where Motorex assisted. From there, a classic that is not missing, nor can be missing, every year in a route through the Pyrenees: the Collada de Toses to La Molina, where Motocard proposed a control of passage with the attraction of a roulette that gave all participants a safe prize…And, from there, crossing the coll de la Creueta, passing through Berga, to Saldes and always by twisty secondary roads and with scary views of the Pedraforca massif, to Gósol, Clice control, and assistance from Shoei for the care of helmets and screens. The route continued to Osona, through the Lluçanès, to repair forces in Viladrau, where bikers and companions could taste the taste of the best apples in the world, the “pomes” of Girona. There was only one more, although equally abundant in attractions, short stage through the emblematic rally sections of Cladells and Brunyola to the city where the rivers Güell, Onyar and Ter converge.
Of course, “la Crom” did not miss the professional photographic care of the participants with photos en route, this time by www.motor-shooting.com.

The fantastic route of Girona

The magnificent 550 km of this sixth edition made up a round day, with good route, and always excellent care and fluidity at the checkpoints. Upon arrival, finishers and companions were able to fill up and repair forces in a refreshing dinner, this time a combination of hamburger and nachos … and Moritz beer, well deserved after such a hot day.
For all participants and companions of this 6th edition, the “finisher” 2022 gift was an original Crom Ride Buff, which was added to the exclusive welcome T-shirt offered by the reborn and once again successful brand Clice.
Once again, the Crom Ride Girona has been a success that opens the door to an already awaited Seventh edition, the 2023! 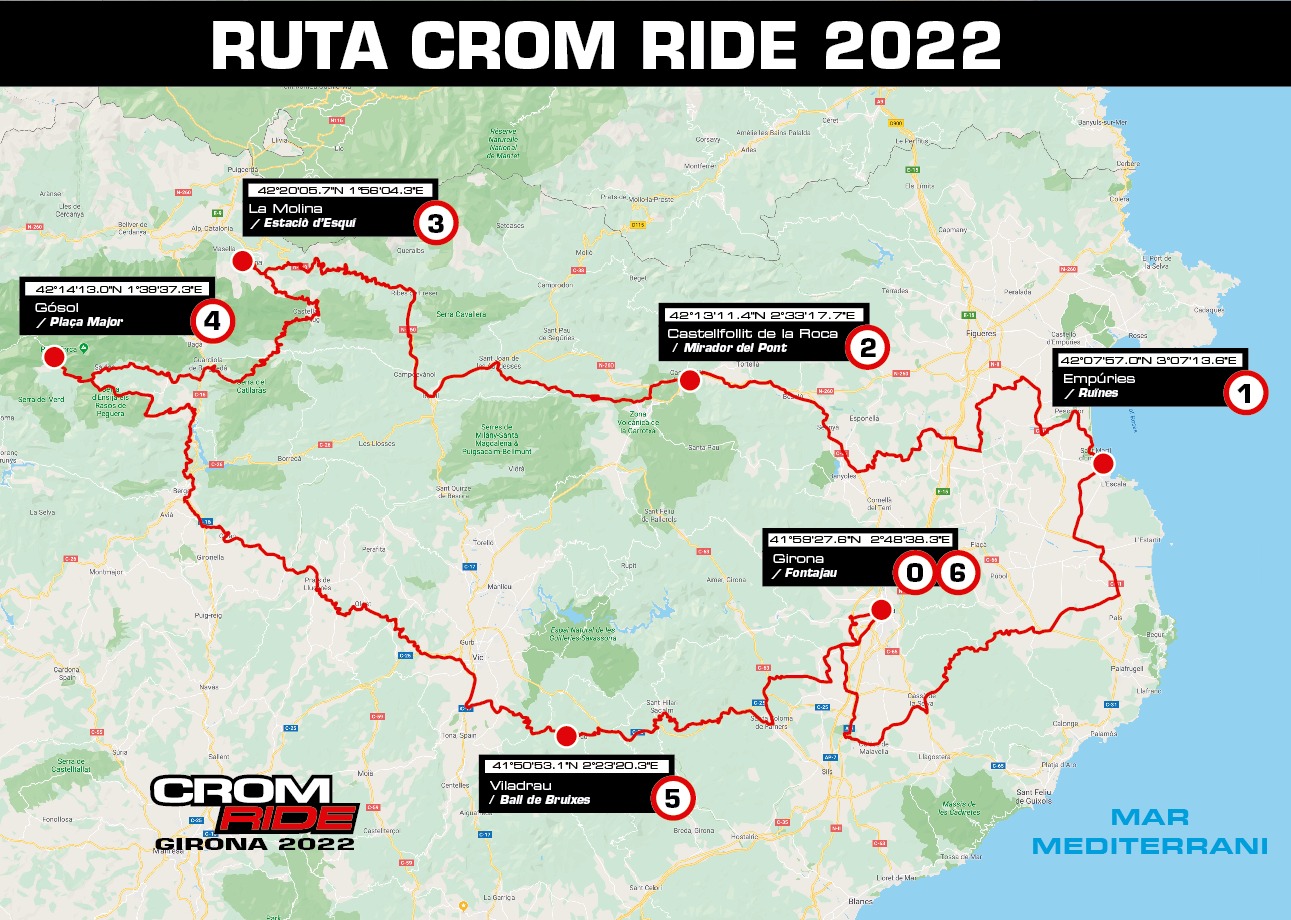 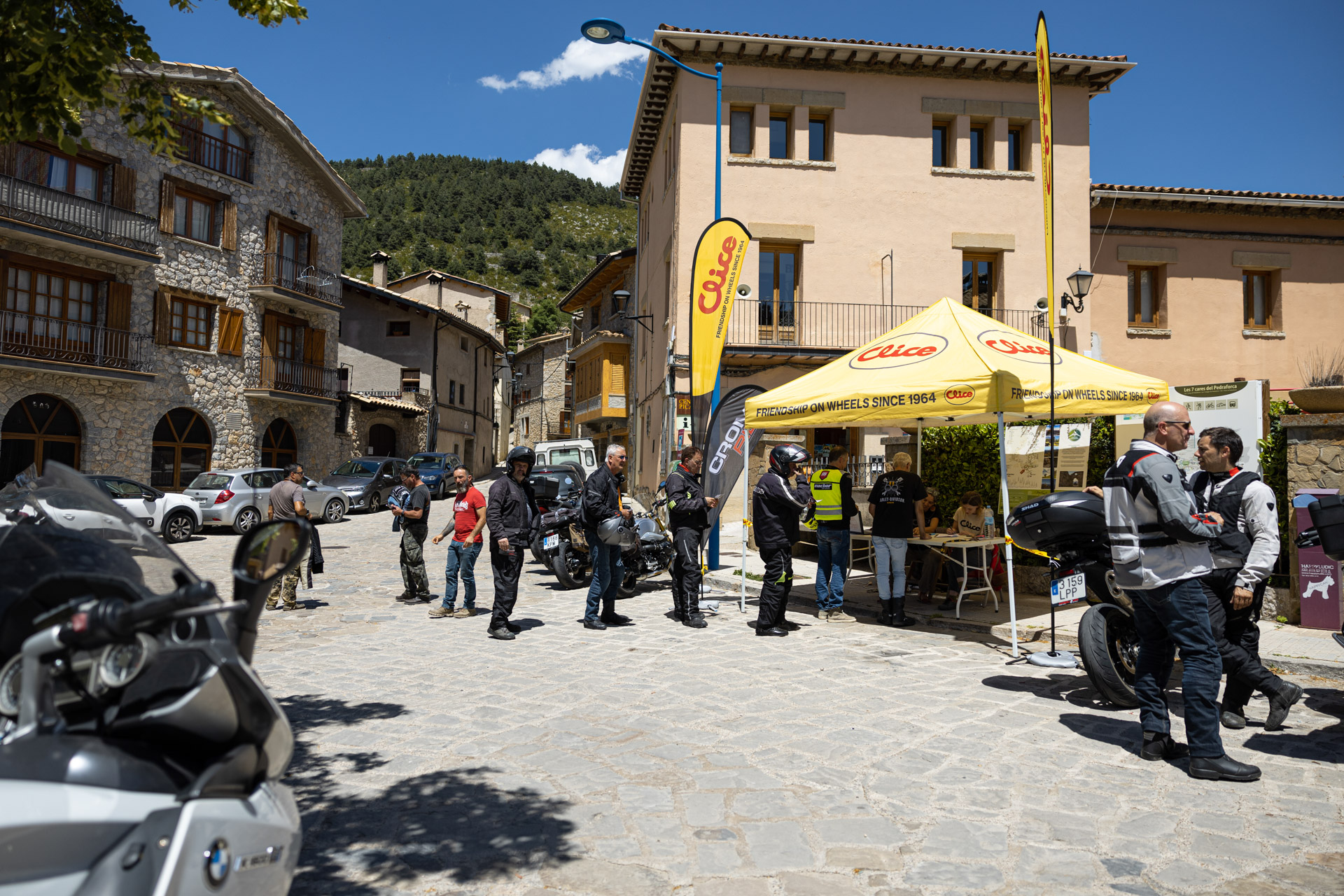